The long awaited Build 48 is finally ready! I’ve put some thought into how I think people might react to this update but am looking forward to hearing more detailed feedback on the changes and if you think they have improved on the game’s shortcomings without compromising what you liked about it.

If you are one of those people who would prefer to get the high level summary of the update or see the visuals, then this video is for you. For more details, please read on!

The first thing to mention are the New Maps we have added to the game. There are three new ones that each add slightly different dimensions and are introduced as you progress through the game.

I’ve also added some new level tilesets that you’ll see in later areas. They are the Cultist “Temple” and the Android “Citadel” and they definitely have a different look that the current tilesets. I don’t have a significant amount of new cover or environment items added to the game yet though. Look for that in a future update.

I’ve also completely removed the “Zone Chooser” from the game in favor of just listing the currently available objectives for you to choose from across zones. Only one objective of a type will be available at a time from now on, so you won’t see more than one “Find Sub” at a time, for instance. The concept of choosing the objective based on difficulty is also gone from the game. This has been replaced by difficulty that scales with the current team. Objectives will have a difficulty floor however, so it is possible to undertake an objective that is too hard but not one that is too easy. Enemies will scale up to roughly match your level. 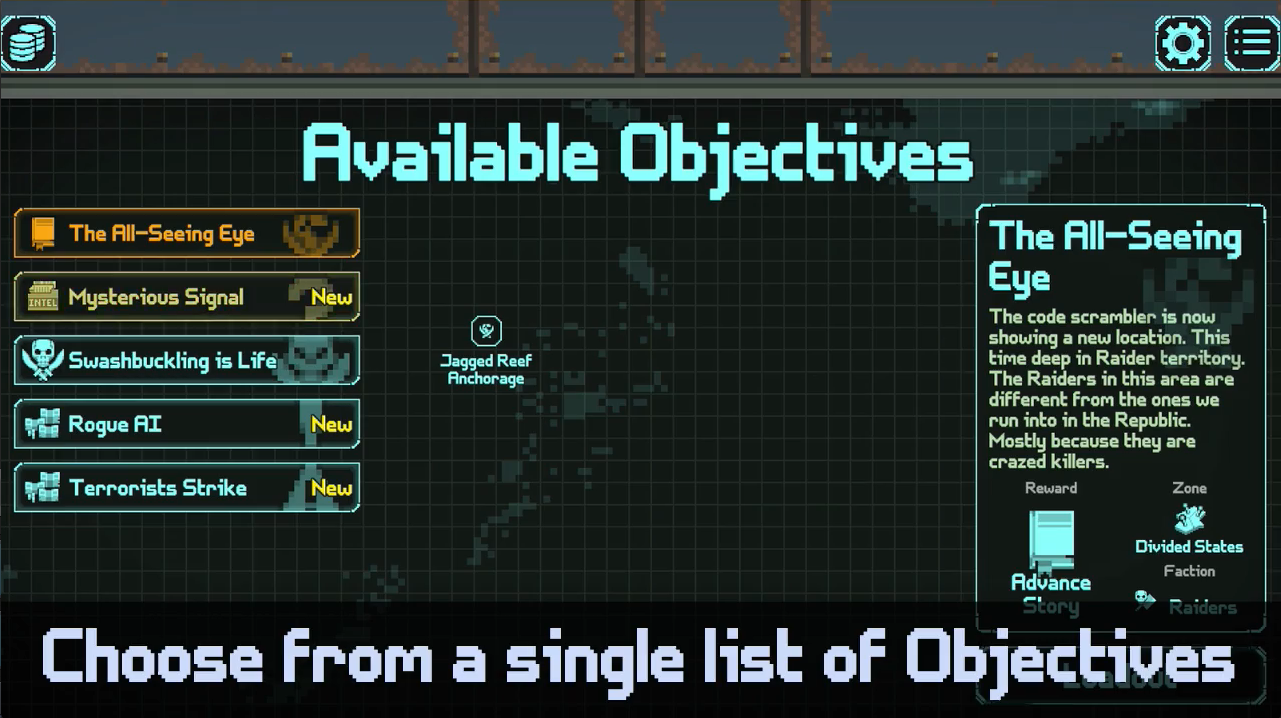 To make the game more accessible to new players, we have added a “casual” mode. The first time you play the new version of DOE, you will be asked which difficulty mode you want: Casual or Classic. Classic will be basically the current version of the game (with the other changes in Build 48) while Casual will have a few differences:

Casual mode is primarily aimed at players who want to experience a slightly easier version of the game and not have to deal with permadeath (unless they want to). 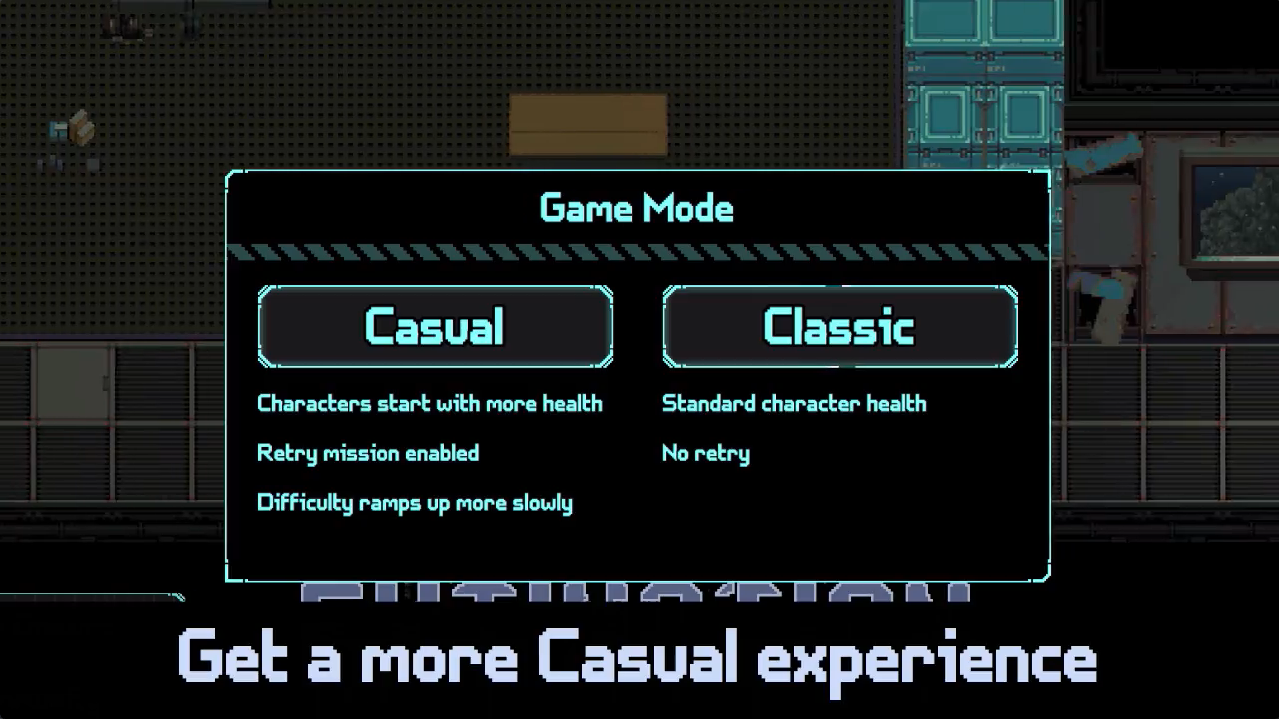 The speed of the game has also been greatly increased. I have gone through each aspect of the tactical component of the game to remove any extra delays and reduce the time things take to execute (like changing the turn and firing). I also have completely revamped the character movement system so that the movement speed can be tuned by the player in the settings. The default speed is significantly higher than the previous defaults. The “cinematic” system also had a setting added to let players control how long the camera delays over items of interest last. Hopefully this solves a lot of the battle pacing issues. These changes are complete rewrites to the character movement system, so I won’t be surprised to hear about a few bugs. I’ll be posting a patch soon with bug fixes, so please let me know if you see anything weird. Videos appreciated.

Since you can “see” enemies before their pod gets activated and attacks you, I have also added a new HUD element to represent the enemy’s visual range. As long as you stay outside that area you won’t activate the pod. I feel like this is pretty experimental so I am definitely interested in feedback.

In addition to activating by “seeing” one of your characters, enemies can also activate if they “hear” you open a door, reload or fire your weapon, or if an enemy in a different pod is activated close by. Enemies can activate if one of these things happens within their audible range, even from another room, so be careful! Later enemies, like androids, have more advanced hearing and so have a larger audible range.

We’ve also beefed up the story with additional cutscenes and banter between characters. There are three more standalone cutscenes and several banter situations during the final mission of each story objective. This should flesh out the story a bit more. 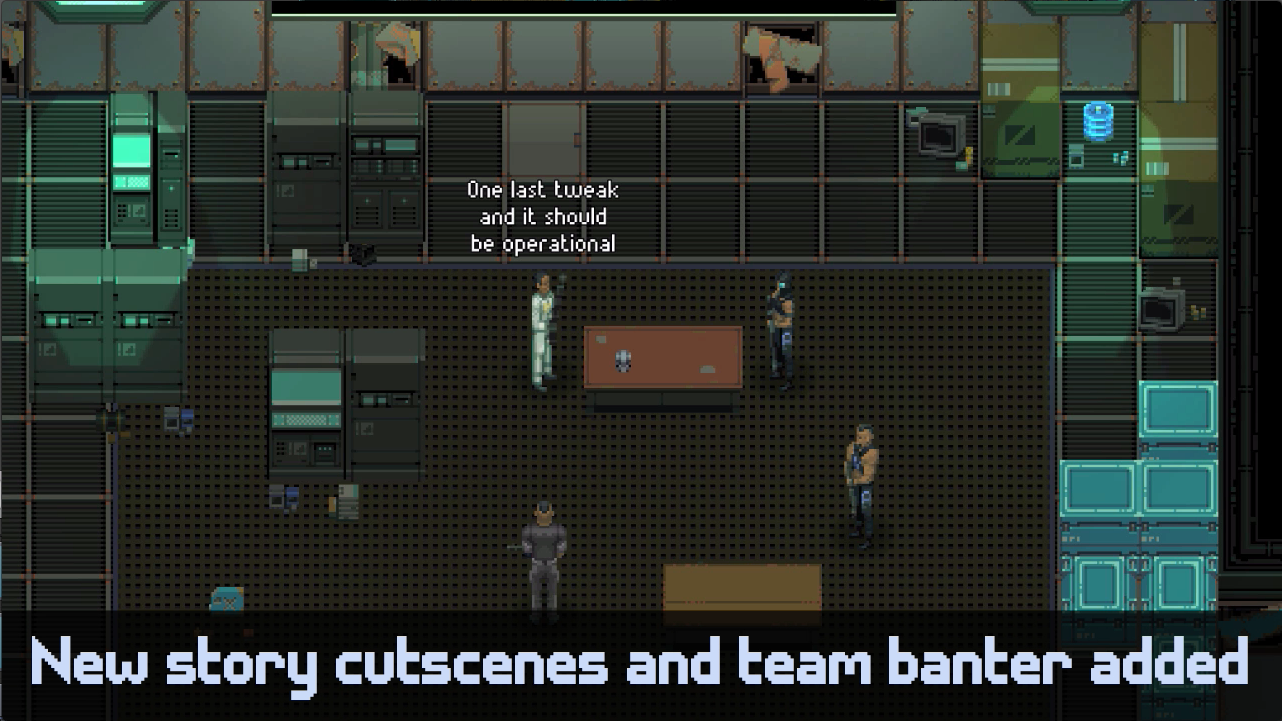 The encounter system has been significantly upgraded, with the main change being new “task” encounters that charge the player with disarming bombs, hacking terminals or disabling a failing reactor as you travel across the maps. These mission types were available previously only as final missions on some side quests. A lot of players found them fun so we wanted to make them happen a bit more often! I also worked with the writers on reducing the number of repeating encounters and outcomes that made it look like things were duplicating.

Some smaller changes to encounters:

One thing that did NOT change is the skill cool downs. I talked in the previous post about changing the cooldowns to “Uses” to give you a fixed number of skill uses per mission. This was actually implemented in a test branch and I did some playtesting with it but ultimately it seemed to negatively impact the initial difficulty and seemed kind of arbitrary. I settled for increasing some of the skill cooldowns and many of the new maps that are introduced later in the game don’t have the “rooms” breaking up the action any more so you can’t just spam end turn to reset them in many cases.

My goal is to try to deliver quarterly updates to the game throughout 2019. I am thinking some new objective types, classes, content and possibly even a new main quest? I am honestly not sure yet but all of this is being considered and when or if these things are available will probably depend on a variety of factors.

All I can say for sure is that the next update will include controller support. Let me know what else you want and I can definitely consider it.

I didn't play the update yet, but the reading is god. Thanks for taking care of your game.

Further addition to the game would be more variety: tilesets, map shapes, enemies, weapons, equipment, starting situation (team split, hit and run, sabotage with real consequence on the next mission...), classes or maybe new perk per class to make them more unique even.

Also, more options, instead of Classical/Casual, check boxes. Permadeath yes/no, health+/-, retry mission yes/no... and let the player pick whatever it wants, without forced penalty/bonus. Like, i want it all hard, but without perma death. My choice, it's a single player game. Or i want perma death, but with one chance to retry a failed mission once per main objective. Or any other combo.