Thanks so much for all the feedback we have received through reviews, forum posts and on our Discord (https://discord.gg/ThN65yS) over the last few days since DOE launched on Steam/GOG/Humble/itch.io. We went (pre-release) from having about 100 people play the launch build and about 15 give us detailed feedback to having thousands play it and hundreds giving feedback. Of course, that means a lot of stuff we just missed prior to launch. This includes major balancing problems and lots of bugs (big and small). With a super small team (only 1 full time developer and a few part timers) we probably can’t get everything fixed as quickly as you would like, but we are committed to making the game a fun and enjoyable experience. Clearly we don’t have this right yet, since many reviewers are not happy with the game, but we are going to keep working on it.

For Build 48, the goal is to address as many of these problems as we can. Luckily, I don’t think the game is that far off from being a more balanced experience and there is now a plan.

This is one of the main imbalanced parts of the game. Many people have found some over powered skill combos and while these are kind of cool to find, they make the game less of a fun experience for many late game players. So, starting in Build 48, Active Skills (that you enable) will now have a “uses” stat, meaning they can only be used a finite number of times during a mission. So your skills will be another resource to manage and you’ll have to be careful about how you employ them.

We’ll also make some other adjustments to specific skills:

Another feedback I have seen quite a lot is a lack of variety to the battle maps. I understand that this is a problem and I had two more map types hat were almost ready at launch but just ran out of time to polish them and get them ready to ship. One of them will be added in Build 48 that is a hybrid between “interior rooms” and the more open “platform” maps. These will have some small rooms but also larger more open areas.

Here's an example of one, and though this is not a finished product yet I think you can get an idea about how this might add a lot of combat scenarios. 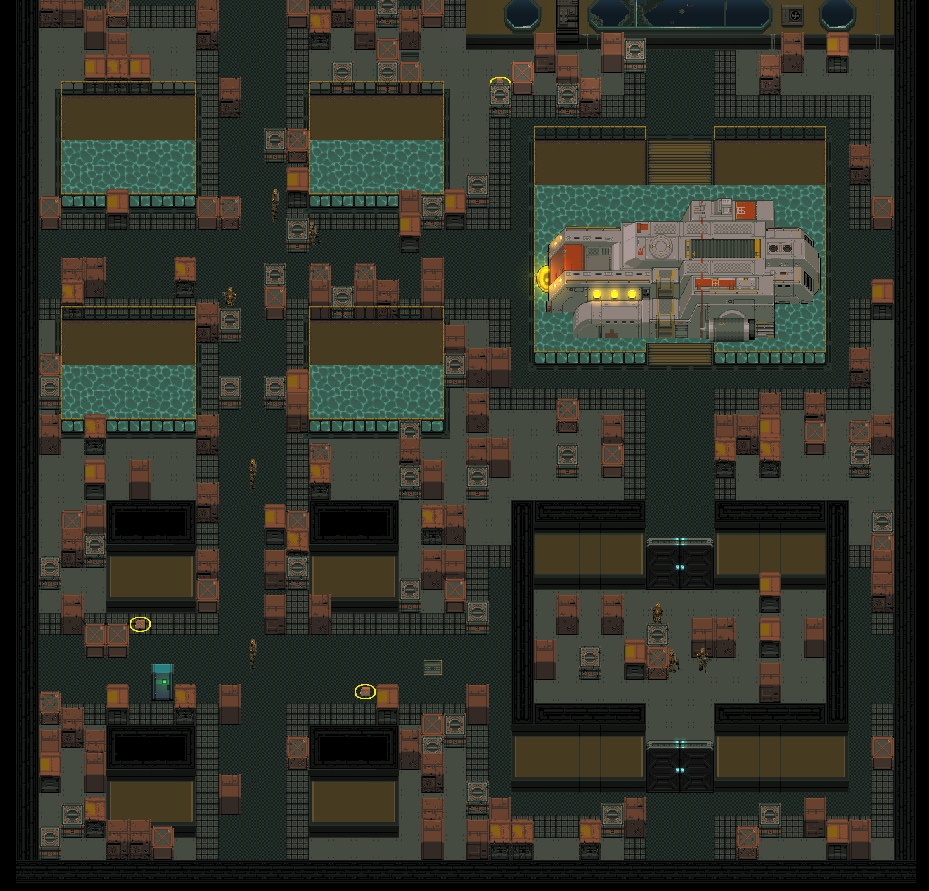 DOE has a nice cutscene system in place (used in the prologue) and a writer who already put together some great scenes to use throughout the game. I just ran out of time to get them all implemented prior to launch, and of course the story totally suffers as a result. I’ll try to get these all in the game as soon as we can in Build 48.

A “turn start” marker will be established to ensure that status effects (like burning and regen) don’t trigger continuously when using Defer.

A new panel will be added to the character modal in battle to show all current effects the characters (including enemies) have so you can better plan your attacks.

Hostages won’t need to be led back to the evac zone when the level is empty anymore.

Expected damage will be displayed in the action area to make it clear how much damage will be done if you fire. This is mostly to address the issues with the shotgun damage falloff not being clear but i think this will help players in general.

Adjust the voice overs. I’m not sure exactly what will be done yet as I am getting a bit of mixed feedback here. Yes, some of the voices are poor quality but it seems like the voice feedback is very helpful for knowing when a character is low on health or ammo for instance. Most likely, the number of voice clips will be reduced and disabled completely during follow mode. The critical ones will stay in and trigger each time as the goal will be to keep the usefulness of the voices but lower the annoyance factor. I will look into getting some additional voices recorded but probably there will not be time to get that organized for Build 48.

And some Quality of Life settings

I know there are a lot of other requests that many of you have mentioned, and I am sorry if the thing you want is not on the list. With the size of our team (only 1 full time developer), choices had to be made for Build 48 that would impact the most players. Rest assured that all requests have been heard and logged and I will try to make all reasonable adjustments eventually. The plan (at the moment) is to do at least 2 more builds (49 and 50) to add in even more content and address more concerns. I will share more details on them after we completely deliver Build 48.

I will be pushing builds to the beta branch on Steam and GOG very soon (possibly this weekend) with fixes as we make them. How those builds will be integrated into the "default" Steam/GOG/itch versions is to be determined. I will need to make the sure the changes are ready by having players try them out and give feedback, and I will try to get some of my internal testers to spend time on them at some point.

The goal would be to completely deliver Build 48 by early November. I'll have more updates on this as we get closer.

Those look like good changes all around! I'll be a little sad to see boost aim and bullet hell not be quite so effective, but it makes sense. Multiple shots and stunning ammo might be worth a look too.  I'm happy to see the change to the swashbuckler weapons too, they are a fun class but almost impossible to get weapons for.

Thanks. We are discussing having an "easy mode" that would give a little more starting health and more skill uses per mission. Would this be something you would be interested in using?

I've thought for a while that Stun is a little OP  so we will definitely be taking a look at that.

We've discussed making the Wildcat "itchy trigger" bonus only affect SMG weapons but i've been resistant because that would make the early game harder or make people not as inclined to select Wildcat (though they are the least chosen class now for some reason).

I've been playing since around build 40, so I'm used to the difficulty. I could see it being very useful for first time players though.

This time going through the game is the first time really trying out stun. It is powerful especially when you use stunning shot with a multi target weapon. I want to test it with a heavy weapon but haven't built a wrecker yet.

The wildcat is one of the first classes I pick up now. It was the last class I tried, but now its normally one of the first I pick up. itchy trigger, bullet hell, and combined arms are all good abilities. Especially combined arms. I wouldn't be surprised if they start getting picked a lot more once people start playing them.

The class I have gotten the least millage out of is the soldier. Maybe that is just how I play though. I’m looking forward to unlocking the rest of the new classes. The class unlock missions work really well, it gives you a nice introduction before you have to figure out how to fit them in your squad.