Hi everyone! I’m taking a break from working on Build 43 today to give you a sneak peak or what’s coming, talk a little about what the schedule is looking like and also make a few announcements.

Let’s start with the announcements!

A lot of people have been asking about the DRM free versions of Depth of Extinction, and we are ready to announce the sites where the game will be available at launch.

Another cool announcement is that we have hired game writer Chris Krubeck to work on the story and lead the writing effort in DOE. Chris has worked on several games, notably the cool story driven adventure game Tokyo Dark. We’re very excited by the ideas he is bringing to the project and think you will be intrigued by what he has in mind.

Also, we have a few places where you can “follow” DOE to get updates on the Game:

You know what they say about the best laid plans but this is what I would like to happen (and what I think is possible) but as always subject to change.

Now about that Build...

It was a little slow getting started on Build 43 but a lot of progress has been made in the last 4 weeks toward realizing the final vision for the game. I took a few weeks “off” around Memorial Day, the first to do MomoCon, where we introduced “arcade mode” which might make an appearance later in a content update as a “daily mission” and leaderboard mode.

Then I actually took a week off to go to Florida so my wife could see her neurologist at University of Miami and visit with family. For those that don’t know, my wife has severe chronic migraines and part of the reason i left my previous job to “go indie” was to have flexibility so that she could see the best doctors all over the country, and for her extended treatments in the hospital every year. June is migraine awareness month so I wanted to mention that!

For Build 43, I am going back over literally every game system and making improvements based on player data and feedback. In previous builds, every Objective was just “kill a boss” regardless of the “storyline” of the objective you chose. I even turned off the objective chooser until you beat the first objective because players were somewhat confused by the initial UI. The additional Map Zones unlocked at intervals based on the number of missions completed rather than based on any particular storyline. I had always imagined a more robust system but wanted to get the tactical elements more solid before coming back to it. We’ve finally made some progress on what I want and you’ll see this theme in the details of what we are planning to deliver in Build 43.

The goal was to deliver more meaningful choices to players from the Objective screen. We’ve now added several different types of rewards (rather than just credits) for completing a mission:

Unfortunately, some of this we have to de-scope from the initial release.

Objectives all have different “final” missions that are more in line with the narrative and provide a more interesting payoff as a result. A few examples:

We’ve got a lot more scenarios that also will feature unique missions. Hopefully this will address the “more variety” feedback that I’ve seen from a few of you.

In addition to the other objectives, we are also adding in “story missions” that will advance the story. These missions will be required to unlock the next area and will be progressively more difficult. The next story mission will be immediately available when the next area is unlocked, so technically you could “finish” the story aspect of the game in only 5 objectives. I’ll see how this plays but I thought this would be interesting for those wanting a challenge or a potential speed run. Beating all 5 story missions without getting any of the optional unlocks will be a challenge for even experienced players (at least that’s the intention).

We’ve also made more improvements to the map generation algorithms and added more scenarios that can occur on any mission. One common one will be needing to disarm facility defenses before opening item containers. Not disarming the defense will be risky as you’ll have to face weapon turrets as well as enemies. The facility defenses won’t discriminate though so it could be a tactical decision to set them off and hope it slows down enemies in the area.

We mentioned the renewed focus on writing and this applies to the random encounters on the map as well. We’ll be tying the missions scenario more to the encounter and have added a lot of interesting things that can happen as you explore. You also won’t be able to skip every encounter as you can do now with the placeholder version that’s been in the game for a while.

One change that will happen is that you will only know the “type” of facility when choosing between them (for instance medical, fuel, republic base) and won’t always get an idea about the sort of encounter that could happen there.

We’ll also be reworking how the random outcomes occur, giving some weight to them based on choices you make as well as the type of characters in your party and the sub you are traveling in (like the “blue” options in FTL) which should add some strategy to your choices.

Since we are making such major changes to the Objectives and Encounters, I thought it made sense to revisit the mission UI screens again. I also want to up the visual quality some and make them look more in line with the recent HUD update. 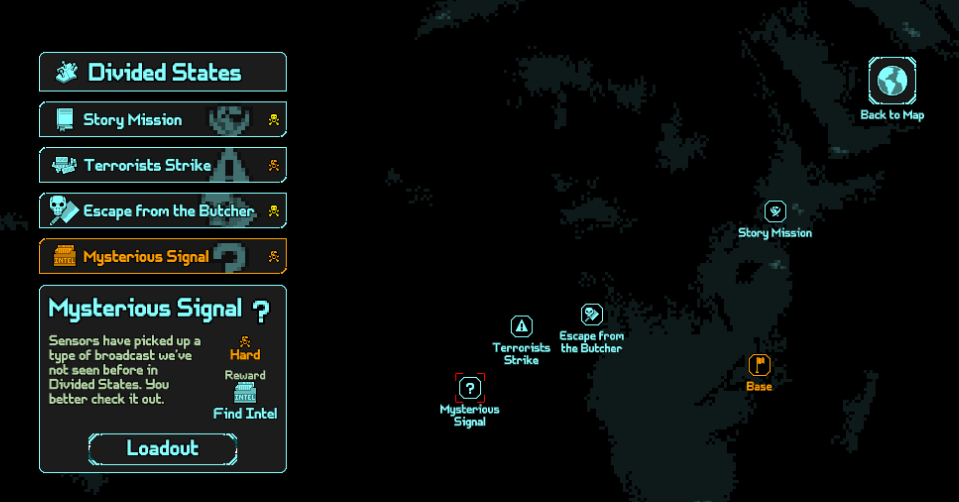 Major improvements on the AI front as we’ve finally got “look ahead” optimized enough to use it which should greatly increase the AI decision making. We’ve also fixed a few bugs.

Another improvement we are working on is an “AI mode” for the player characters. This would only be used when moving around the map when enemies are not in range and would just simplify the orders required to explore or do backtracking. This would require you to only issue orders to a “leader” character and have the other characters follow suit. If the leader grabs a loot from a dead enemy, then the AI controlled characters would do that. If the leader stays in cover or moves toward a door, then AI would do the same.

This is not certain to be in Build 43 but we will see how far along it comes and decide if we want to add it experimentally.

A lot of people have commented on the load times and we have known it’s a problem, especially on larger levels. We’ve made some optimizations to speed that up significantly that will be out in Build 43.

Since many people get major setbacks while playing from the RNG and poor choices, I am considering adding an “easy mode” that will allow you to repeat a mission where your team got wiped out without any kind of penalty.

Hello team! The build 43 is coming soon? Sorry to ask you this but I'm preparing a preview in my podcast https://sansjeuvideofixe.com/ (in french) and I would love to talk about the latest additions! Keep up the good work, this is an awesome game !

thanks! still working on it but getting closer!

Good reading, i'm looking forward to the release. I'm happy to be one of the early supporters, you did a great job so far with answering questions, support (including Linux) and updates.

Did you do something about the map(s) ? Last time i played (1 or 2 versions ago), there were too many layers of maps before reaching the actual "game" part. World, Region, Local, Mission... for no real good reason, but multiply the nodes before being able to actually "play".

In xcom, Xenonauts, UFO:AI... there is one global map, with several missions to pick, and then you reach the battle map. And still, few would argue about the lack of depth of these games.

About the Easy Mod, i'm glad you think about it. I really dislike the perma-death in any game, there is a kind of fashion these days where you must be "roguelite" somehow... and it's often limited to permadeath and random generation of the world. I call this more "messy" and "lack of personnality". Being able to simply retry a failed mission, without any drawbak (locked acgievement, less loot...) would be great.

I appreciate your support! Thanks for the feedback and comments.

Still working on those maps! I'm still keep it that way but I think the latest round of changes will make it seem less convoluted. It's possible I could ditch the "zone select" screen (the world map) but to me it's more of an organizational thing than a map you must navigate. I do appreciate the feedback and will keep working on it.

I agree having penalties or having to start over after the team gets wiped out is pretty harsh and makes the game much less accessible and more frustrating to first time players. This is the main motivation for the change.