We're pretty excited about Build 42 as it introduces a few new classes (and removes another), completely revamps the items and rebalances the game. The one side effect of this rebalancing and item update is that we will be resetting save data. I think it will be worth it though!

The coolest thing in Build 42 is the Wrecker class. Wreckers excel at clearing out cover and working in tight spaces. Their primary weapons are MiniGuns, which do Area Of Effect (AOE) damage. MiniGuns each have a Min and Max hit value that is the bounds for a random number of hits on targets in the AOE. The low end MiniGun has 1/3 hit and does 2/4 damage per hit, which means it will hit 1-3 times on with 2 damage (4 on a critical). There are 5 different MiniGuns to fund, each with different effects and that do increasingly more damage.

The Wrecker skills compliment this weapon really well and we will fill you in on them in the next update.

We also are introducing the Warden class and removing the Saboteur. We'll post more about those in the next update when the build is ready.

We've also reworked how SMG weapons function and given them some new effects.

Many of you have let us know that the game difficulty just doesn't ramp up very much. We've done some analysis and determined that the main culprits were:

We think we've got better values in place now and the game is much harder as you move into the second and third areas. We'll be monitoring this closely and have actually made some changes to our analytics to help us collect the data to see how this balancing is going and if it is achieving the goals.

We have been working hard on improving the cover system to allow the corners of walls to function as cover and reduce the obstruction rules so that it's easier to fight in the new cramped interiors of the undersea facilities. It's working pretty well so far and we expect it to be ready in Build 42. This is a significant re-write of the cover system so we also expect there will be bugs and other weird stuff. It's always helpful to get your input on these items so please let us know your thoughts.

We're adding a lot of new items to Build 42 that should give you even more options on setting up your character load outs. We are now at 49 different items that are equippable in one of the slots. We've added a few new armors to go along with the item update and our artist has designed some awesome new icons for the items. Some of them have in game representation. Here's a peak at some of the new ones:

A lot of people have been asking when we will start distributing Steam keys to our First Access buyers, and the good news is that it will be soon! Build 42 is the first time we will be testing Steam achievements so we are getting very close to being ready!

We're totally committed to making DOE be a great game that you will enjoy, more so than trying to hit a launch date. Right now, we are targeting mid-July for launch on Steam (and possibly a few other places).

Give it to me already!

So when will Build 42 be ready? Probably next week. Stay tuned until then!

Hello. Loving the game so far and can't wait for the new build! I have two small ideas that I feel (for me at least) might help the game. The first is when planning out an attack I sometimes forget what guns my characters have (whether I hired a merc or changed guns recently) and so I click through the characters remembering the order of the guns to plan where to move them. I feel that maybe having a small gun icon on the HUD indicating what guns the characters have could make it so you're able to more quickly plan an attach and not have to cycle through the characters first. Next is the hit percentage. Sometimes (normally with a sniper or carbine with a scope) I have a shot where the hit chance is maybe just a bit lower than I want. However I have experienced sometimes that when I use 1 of the 2 actions points to move to what I feel is an easier shot, in reality it wasn't and so my hit chance is much lower when I shoot. What about the possibility of having an option where you can see the new hit chance in the spot that you are considering to move to?

I'm not sure about others but I feel these could help players out. Keep up the good work!

You would not know this information in real life, and until you move to a spot, you can only guess at how a clear of a shot you might have when you get there.  Also, just the act of moving would probably decrease your chance to hit because you'd have to quickly settle into position and take the shot.

But, I'm ok if the developer thinks it's a good idea.  It would certainly make the game a bit easier to plan your movements, but I don't know if I really want that.

The Build 42 update is now live and actually I think we have anticipated your request to make the weapon more visible as that is a major part of the HUD redesign we have in this build.

As for the other idea to show the hit percentage of potential moves, i am somewhat opposed for a few reasons:

I'll keep thinking about the "spirit" of the request though: make it more clear if I am making a mistake by moving here.

Yeah come to think of it I agree it would be a bit too much information as you can't tell until you actually get to that spot in real life.  New build is great!

Hello.  Today is the last day of "next week".  Any chance we might get the new build today?  It sounds really good.

I'm actually wrapping up details on the last few changes right now! Sorry, this took a bit longer but I got a little ambitious and decided to redo the HUD again. Here's a preview. I'm going to do the build here shortly and then do some playtesting to make sure all is well. If I don't run into anything major I'll push it out to itch. 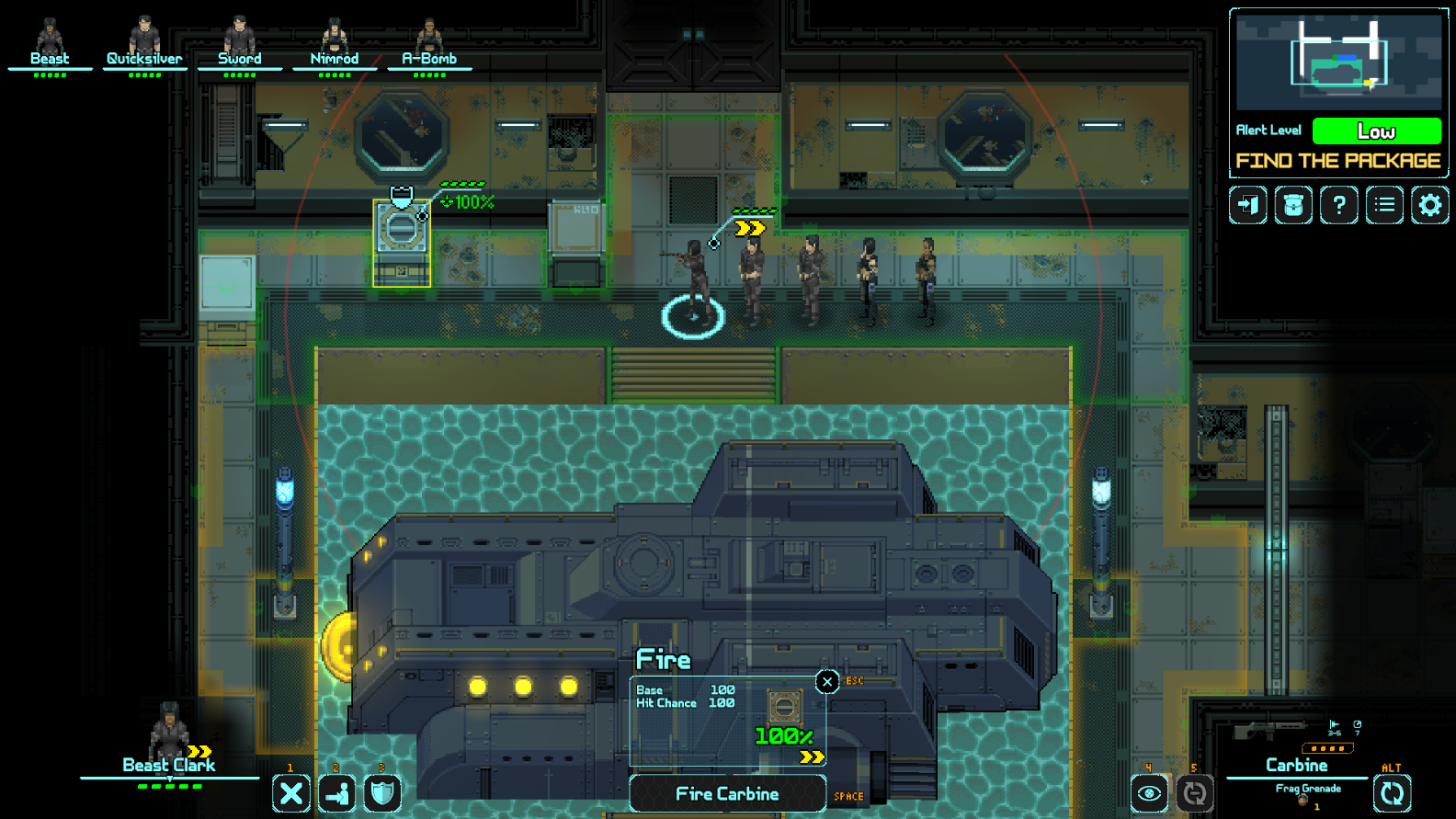 Sorry about the delay. there were a lot of bugs to fix (i still didn't get them all) that kept me busy over the weekend. It's playable enough to release today so I pushed the button!