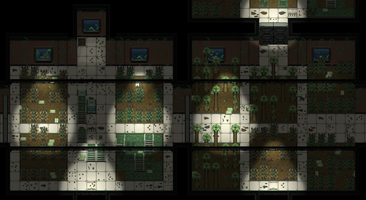 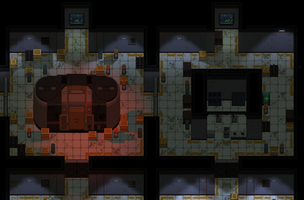 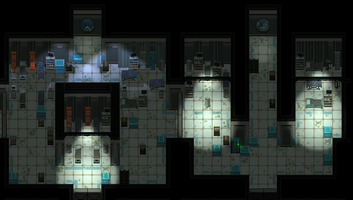 We are hard at work on Build 40 of Depth of Extinction but it won't be ready until next week. Since we get asked a lot of questions about the game on our various message boards and emails, I thought it might be fun to take a look at some of the ones we get a lot. Here are some of the questions and answers (from us or others)!

(ok this is a loaded question haha)

We've completely revamped the combat mission maps so that all levels are broken down into rooms and there are doors separating each one. Before you can enter a room, you have to open the connecting door. This is only the undersea habitats of course.

We also have some all new themes for each facility. They used to be kind of generic but now we also have Medical/Hospital, Reactor/Power generation and Farm/Food Production facilities. Each one has different set pieces and and is very themed to the facility type. (see the screenshots)

How many weapons are in the game?

Currently, there are 33 different weapons in the game. Plus a few more that are only used by enemies and can't be equipped by the player characters. I could see us adding a few more but mostly we'll be focused on finished the effects for each one before release (they are not all done and some currently share effects).

We've got the weapons categorized into 8 different "weapon classes" that are then associated to character classes. A weapon can be freely equipped to any character but has penalties if the character is not of the proper class. Here are the weapon classes and descriptions:

Sniper - Specialize in long range warfare but not very useful up close
SMG - Fires multiple projectiles at close range
Bio - Weapons that make you feel all icky
Shotgun - Devastating close range weapon; less effective farther from the target
Launcher - Fires an explosive projectile at a target or area
Rifle - A versatile class of weapon that has many firing capabilities
Heavy - Requires a specialist to handle properly
Whaler - Fire projectiles that cause the target to bleed out

Is the battle system like X-com Enemy Unknown or Jagged alliance?

(this answer is from a Steam player Galp not us)
X-com, mostly because it uses the "2 actions" method instead of individual action points. I usually lean towards preferring more granular jagged alliance style but here I thought they hit the right compromise between streamlined and detailed. You feel in control throughout.

What is the music in the game?

We've got music from a few different artists currently and we may add more later on. Here are some soundcloud links and track lists for the curious:
Kim Lightyear
tracks:

Badass Wolf Shirt
tracks:
our knives are the sharpest knives
never get better

I have never used itch.io. How do I get updates when you put out a new build?

Itch.io actually has an app you can install that will auto-magically download updates in much the same way that Steam does for you. You can get it at this link: https://itch.io/app

I've one question to,  a translation in others languages, not necessarily made by you, but by anybody who wants to do that ?  it's something possible ?

Great question! We've not yet implemented the localization system but it's something we're going to be looking at once we have finalized all the in game dialog and encounters.

We've had a lot of offers by fans to help with the translation and we could definitely get you all involved when that time comes. We will probably identify some languages to get "professionally" translated and then post spreadsheets where fans can provide translations (or work together on them) for other languages.

What language would you be interested in helping with?

I can help with russian