Finally! Build 37 is here. Save files *should* be compatible but for best experience, i would start a new game.

The biggest (and maybe most interesting change) are the new “Platform” environments.  These battles take place on the surface of the ocean on top of the remains of some ruined facilities. These should make for some different combat situations as the levels are laid out in a completely different way than the current interior levels and will require different tactics in order to succeed.

Platform missions are on the remains of old and ruined facilities that have been retrofitted as homes. Some may have secrets to find!

Camera controls have also been tweaked, especially the right click and drag camera movement (try it or reverse it in settings!). We also reversed the drag direction since I am assured that the old “reverse” drag is what most people consider the regular drag. I guess I’m not most people. I also realized that screen shake had been disabled prior to this build, so that’s back and improved (from before?). Also, a bug that did not actually give full control of the camera to the player when the “manual control” setting was enables has now been fixed. I hope.

A new faction makes an appearance in this build: Pirate! Argh! Avast! Swashbuckle! You’ll have sub to sub combat when things go south in a Pirate encounter. These should be a fun change of pace as they are short and only require you to eliminate the enemies for now. We have some more things planned for pirates in a future build. 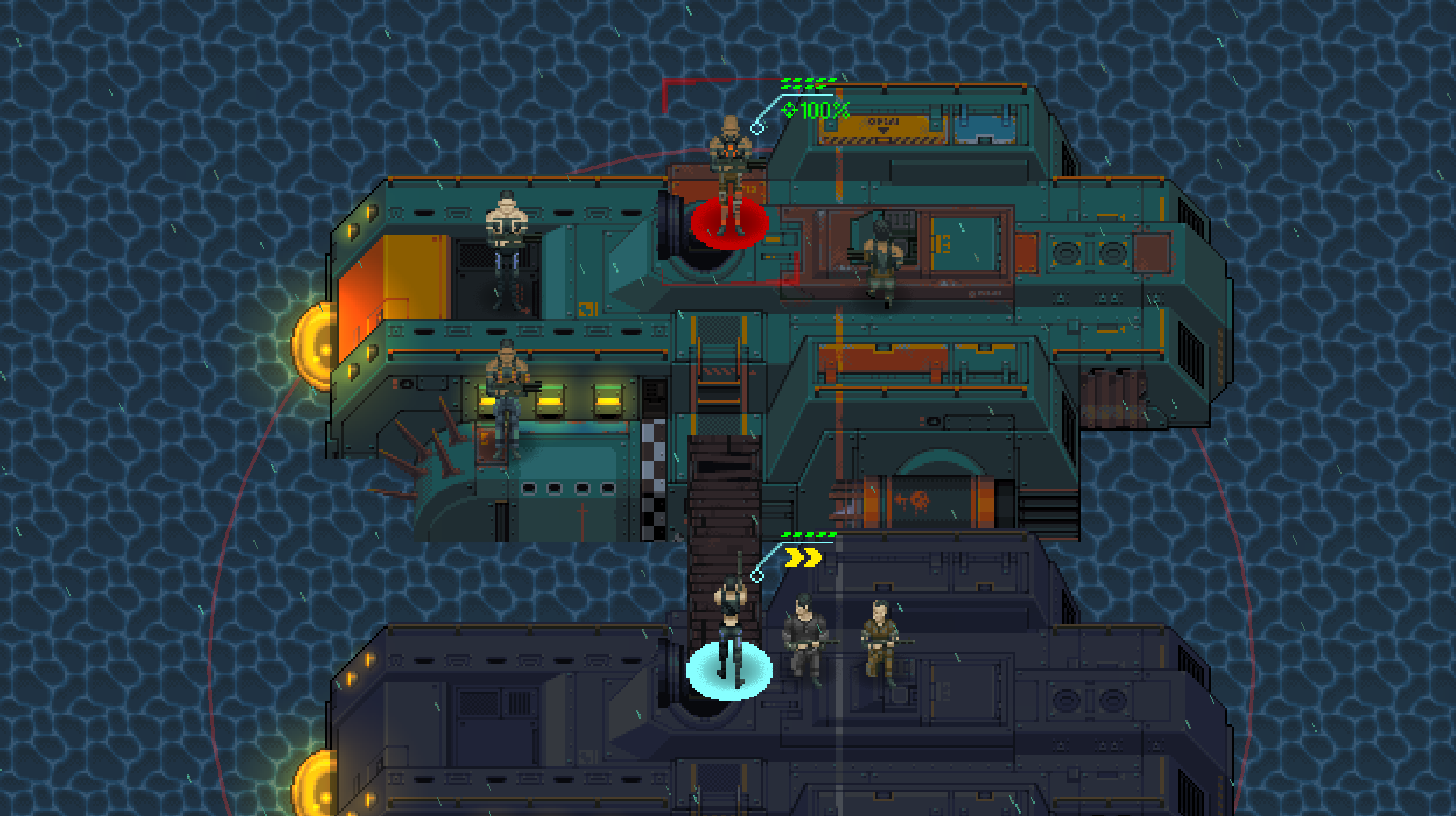 Pirate missions are short and sweet

“Mini Boss” missions will now appear on your map and give you a bit of an extra challenge (if you want it). These missions (and the regular Boss missions) now take place in a special Arena style map that is not procedurally generated and has no Fog of War. Just beat the boss and get the heck out of there.

Some “cinematic” style text has been added to the beginning of the Boss and Pirate missions. Our long term plan is to replace all the spoken dialog in the game with this style of text. It just makes more sense from a budget perspective than voice over. We’ve got a lot of plans to make this a nice system to help develop the characters and give each one a specific personality.

What’s coming next in Build 38?

We’ll make a blog post next week about the major Character Class Refactoring we have been planning for a few months now. We’ve got 8 different main classes planned out, plus there will be 4 enemy faction classes that can be unlocked. It’s possible not all of the character classes will make the cut and at least 1 or 2 will have to be unlocked.

We’ll be working on another set of new maps and some more Facility types to keep things interesting. Farms and Power generation are the plan for facilities and some new “cramped” interior spaces for the maps.

Another big change will be that the text encounter outcomes will start affecting the missions. This feels like another good future blog post topic. Picture events like “It’s a trap!” resulting in your characters being deep in an enemy installation and having to get back to the sub. For larger teams, we might even split you up, increasing the challenge.

We will also be looking for some volunteers to help us test out new Steam specific stuff like Achievements and Cloud saves. Keep an eye out for an email!

Quick feedback on the 37 version.

Everything feels already much smoother than before. Better camera control included during Enemy turn, stop and move on enemy spotted, more slavers/shops/opportunities to get new crews, more variety in shapes and colors for mission layouts...

I'm half-way on my second nodes, i bought 1 crew and lost it next mission, then bought 1 slave, and then 1 more crew. I have some armor, medkit, varied guns, 2 of my toons are level 2 and 2 level 3, plus the new noob. So far it's going pretty well. I feel i must be careful, but i also feel i have some control, it's good.

Thanks! Glad it's working for you so far.

Awesome ! Time to play some more, then.